Mark Surge, lightning hero of Hero Factory, returns to the set waves in neon green and bright blue. He sports two silver shock tower shields on his shoulders, his previous Rise of the Rookies helmet, a lightning shooter with a blue blade, turned now into a sword, handcuffs, and a plasma gun with a green sphere. A transparent cord with a blue inner runs from his back to his lightning sword. A white Hero Core with a light grey base is stuck by two bars onto his body armour, coloured blue with yellow lightning bolts. His handcuffs are connected to a black Exo-Force robot hand on his right thigh armour.

Surge is competitive, hot-tempered and clumsy. During the battles against Von Nebula and his minions, he was recognised by Stormer as a full-fledged Hero. He secretly believes that he was built with a flaw that will make him turn evil. 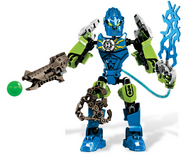 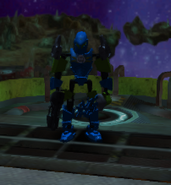 Surge in the online game, Breakout

x12px $17.99 +
Released
2012 +
ShopDescription
Shock the villains in their tracks with … Shock the villains in their tracks with SURGE’s electricity shooter!</br></br>SURGE, there’s been a jail break at the Hero Factory and we need your help recapturing them! We can’t leave anything to chance, so we’ve equipped you with a high-power electricity shooter, plasma gun and super-thick armor. Slap those cuffs on them and give them the shock of their lives!</br></br>* Features hero cuffs, electricity shooter, plasma gun with shooter and extra shoulder armor</br>* Fire the plasma shooter!</br>* Includes decorated chest piece</br>* Highly flexible and poseable design</br>* Also includes unique code worth 200 game points for LEGO Hero Factory BREAKOUT game!</br>* Battle with the dangerous 6218 SPLITFACE!</br>* Combine with 6218 SPLITFACE for an even bigger model!</br>* Stands over 7” (18cm) tallbigger model!
Theme
Hero Factory +
Title
Surge +
Type
Set +
USPrice
$8.99 +
Advertisement