6218 Splitface is a Hero Factory set released in January 2012. This set contains 50 pieces.

Splitface, split in body and split in mind, is built out of red and dark silver parts, with a few others colours like green thrown into the mix. One side is ‘organic’, the other is ‘mechanical’, and each side has a special weapon which suits itself. On his red organic side, Splitface has three pieces of red armour, all with a rounded extra armour brick on them in the same position. One goes on each leg, and the last fits onto his upper arm. His organic weapon is an infecticide launcher, made up of a sphere launcher and a gun-piece with a green laser blade. His body, the basic colour of which dark silver, has red markings along the left side, which further adds to the ‘split’ look. The villain's other side has dark silver armour with a spike at his knee, and a shock tower shield piece like that on Surge's shoulders on the armour situated on Splitface's right shoulder. The markings on the mechanical side are those of lighter grey gears and wires. The mechanical weapon is a Shredding Claw, according to the Hero Factory website: “Schizophrenic Splitface’s favorite weapon is his Shredding Claw – except when he prefers his infecticide. The claw is certainly the most intimidating accessory he carries, and with his strength it goes through hardened steel as if it were wet tissue. Any Hero who gets in the way needs to dodge – and fast! Or it’s lights out.” The weapon is made of several pieces, prominent among them being two claw-spikes, also used majorly in the 2.0 line, and a shield-armour piece with a lime green spike. The villain’s helmet is two pieces, both identical, in different colour schemes. At the top, there are two extra eyeholes. The helmet connects to the cross-holes in the sides of Splitface’s head.

In the Breakout story, Splitface, with the help of mastermind Black Phantom, Voltix, and Von Nebula, broke out of the villain containment level in the Hero Factory. He traveled to the Sigma Sigma communications satellite and was tracked there by the Hero Factory, who sent Mark Surge to capture and bring him back to the facility. When Surge found him, Splitface's two sides were having a conversation-argument about which side was best, and when Surge appeared, the two sides started to argue about which weapon he should use to fight Surge. Taking advantage of the distraction, Surge began the fight and ultimately beat the villain. 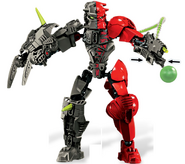 Splitface in the online game, Breakout.
Add a photo to this gallery

x12px $24.99 +
Released
2012 +
ShopDescription
Constantly at war with himself, Splitface … Constantly at war with himself, Splitface is part organic, part mechanical, but all evil. His organic self prefers to use deadly infecticide, while his mechanical self relies on the vicious shredding claw. Both are dangerous, especially when he can’t agree with himself and uses both at the same time. Fortunately, he can be tracked by following the arguing between his two selves. <br /> Splitface, after escaping from Hero Factory’s villain containment facility, is attacking the communication satellite in the Sigma Sigma system – unless Surge can stop him in time!ystem – unless Surge can stop him in time! +  and Evade capture with SPLITFACE’s shreddin … Evade capture with SPLITFACE’s shredding claws and split personality!</br></br>Heroes, we hope you’re receiving this message! SPLITFACE has escaped and is trying to disrupt Hero Factory communications. Equip yourselves with anything you need to combat his vicious shredding claw, plasma gun, precision laser and split personality and stop him before it’s too late. Failure is not an option!</br></br>* Features shredding claw, plasma gun with shooter, precision laser and dual-face mask!</br>* Highly flexible and poseable design!</br>* Fire the plasma gun shooter!</br>* Includes unique code worth 300 game points for LEGO Hero Factory BREAKOUT game!</br>* Battle with the hero 6217 SURGE!</br>* Combine with 6217 SURGE for an even bigger model!</br>* Stands over 7” (18cm) tall!igger model!
Theme
Hero Factory +
Title
Splitface +
Type
Set +
USPrice
$12.99 +