Core Hunter has a colour scheme of black and red. He uses a pincer-like weapon to remove Hero Cores. His other weapon is a silver-topped blaster with a green ball, and an ammunition belt connects to it. His arms are shorter than other Hero Factory sets, with a regular-size upper arm and a ‘neck-extension’ piece for the forearm. He wears bulky armour with curved spikes on his upper arms, and another armour piece built the same way on his back. Core Hunter’s legs are similar to Bulk's, being the length of the larger Heroes’ legs, and they resemble Bulk in the way that the lower leg armour parts are constructed the same way, but in different colours. His feet are black 2.0 feet. The villain’s body plate is totally black with no markings, and connecting to the place where, on a Hero, a Hero Core would go, a chest-plate like Black Phantom’s is put. Both of his weapons have a straight red spike on them. The head-piece is extended a little way outwards by a neck-extension identical to his forearms, is transparent orange, and a black multi-vision helmet with six eyeholes connects to the cross-hole on top of it.

According to the book titled “The Doom Box” written by Greg Farshtey, Core Hunter was once a Hero but went rogue much like Von Nebula. Apparently Core Hunter grew a reputation for surgically removing Hero Cores soon afterward and was eventually arrested by the Hero Factory.

During the time of the Breakout, Core Hunter never left the planet (unlike the other villains) and went to Makuhero City to prey on the heroes who were sent to take him down. It is currently unknown if he was ever stopped or not, but sometime afterward he did manage to escape or leave.

Eventually leaving, Core Hunter went to recover the mega weapon known as the Doom Box alongside various other villains. Created 5,000 years ago the Doom Box was supposed to have the power to destroy anything and anyone the user wanted to. When it was created it had a major flaw; it could not be stopped. So, the leader of the team; Actor; who created it used an energy axe to split the box into three pieces. The one that didn’t want to destroy the box; Deben; drew a map of the universe for where they hid the pieces, which got traded and sold all the way down to Core Hunter.

Core Hunter is an extremely methodical and precise villain, with surgical intelligence and a perfectionist attitude towards his job. His obsession with removing hero cores eventually developed into his criminal specialty, and he is known to have a growing lust for more and more Cores to add to his collection. 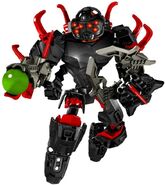 x12px $24.99 +
Released
2012 +
ShopDescription
Stop the CORE HUNTER from disabling the … Stop the CORE HUNTER from disabling the heroes!</br></br>Red alert! CORE HUNTER is on the loose somewhere in Makuhero City and is trying to disable as many heroes as he can get his claws on. His plasma shooter, multi vision mask and razor spike armor are dangerous, but his hero core remover must be avoided at all costs. Cuff him or he could disable all the heroes and bring chaos to the galaxy!</br></br>*Features plasma shooter, Kanohi Kraahkan, razor spike armor and core remover tool</br>*Highly flexible and poseable elements</br>*Includes unique code worth 300 game points for LEGO Hero Factory BREAKOUT game online at our www.HeroFactory.LEGO.com</br>*Fire the plasma ball shooter!</br>*Battle with hero 6223 BULK</br>*Combine with 6223 BULK for an even bigger model</br>*Stands over 7" (20cm) tall! bigger model
Theme
Hero Factory +
Title
Core Hunter +
Type
Set +
USPrice
$12.99 +
Advertisement