Natalie Breez, former Alpha 1 team rookie, appears in Breakout with her two trademark colours; lime green and red. White pieces appear as thigh armour pieces and the limb pieces on her forearms. Her body armour, lower leg armour, feet, hands, and armour situated on her arms is all lime green, as well as her helmet and a third foot-piece on her back. Breez is the only Breakout Hero to use 1.0 feet. Two flight-enabling rockets are connected to her lower leg armour, and like most of the other Heroes, her handcuffs are clipped to her right thigh. Armour pieces like that of Evo’s round shoulder armour piece are, like Black Phantom’s, connected to her upper arm armour, and on her left forearm, she wields a red Hex Energy Shield. Breez’s weapons consist of a sword with two blades and a red plasma gun with a green sphere.

Natalie Breez is the only female Hero so far, and she is extremely agile and a skilled diplomat. A quirk in her core's structure allowed her to communicate with many, many species of animals, if not all, and she is determined and always ready for any mission. She did not appear in the first two episodes of Breakout, though she came in the first Breakout wave. Thornraxx, the villain creature she is hunting, did not appear, either. 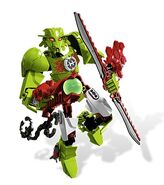 Natalie Breez at the hive planet 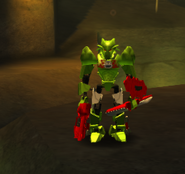 Breez in the online game, Breakout

€11.87 +
Released
2012 +
ShopDescription
Bring the villains to justice with BREE … Bring the villains to justice with BREEZ’s rocket boots and energy saber!</br></br>BREEZ, we hope you can hear us! The Hero Factory has been breached and the villains are escaping in all directions! With powerful rocket boots, double-bladed saber, plasma shooter and a hex energy shield you’re our hero in the skies, so let’s cuff those villains and teach them that the good guys always win!</br></br>* Features hero cuffs, rocket boots, double-bladed saber, plasma shooter and energy shield!</br>* Fire the plasma shooter!</br>* Includes decorated chest piece!</br>* Highly flexible and poseable elements!</br>* Also includes unique code worth 300 game points for LEGO Hero Factory BREAKOUT game!</br>* Battle with the flying villain 6228 THORNRAXX!</br>* Combine with 6228 THORNRAXX for an even bigger model!</br>* Stands over 7” (19cm) tall!igger model!
Theme
Hero Factory +
Title
Breez +
Type
Set +
USPrice
$12.99 +
Advertisement