Thornraxx has a colour scheme of orange, black, and dark azure with red accents. He resembles a wasp with long arms. Those arms have grey and dark azure limb pieces, black around with orange spikes, and each hand holds a black claw like Raw-Jaw’s tusks. His tail is build from black and grey limb pieces, orange and black armour, and a corrupted Quaza spike at the tip for a stinger. The set does not include a Hero body, but a brick-built one using multifunctional pieces, connected by a technic rod. His wings connect to his body next to his tail, and they are transparent, resembling swords. Thornraxx’s head is very similar to the Arachnix Drones, and is built exactly the same except for a shorter peg used and the absence of the drone legs. His eyes are transparent red, his head is black, and he ‘spits’ globules of red venom with an orange sphere launcher. Orange cords run from his wrists to his wings.

Thornraxx escaped in the Breakout wave and hid on the hive planet. According to his LEGO.com bio, he is meaner than the other hive planet insects. Natalie Breez was sent to find him, catch him, cuff him, and return him to the Hero Factory. 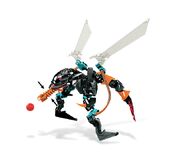 Thornraxx in the online game, Breakout

Thornraxx cuffed in the game

x12px $17.99 +
Released
2012 +
ShopDescription
Capture THORNRAXX without getting stung … Capture THORNRAXX without getting stung!</br></br>Sound the alarm! THORNRAXX has escaped through the black hole and is hiding on the hive planet! Get there on the double and cuff that villain! Just be prepared for his shooting venom spitter, deadly stinger and razor claws!</br></br>* Features venom spitter shooter, deadly stinger and razor claws!</br>* Highly flexible and poseable design!</br>* Fire the venom spitter shooter!</br>* Includes unique code worth 200 game points for LEGO® Hero Factory BREAKOUT game!</br>* Battle with 6227 BREEZ!</br>* Combine with 6227 BREEZ for an even bigger model!</br>* Stands over 6” (17cm) tall!igger model!
Theme
Hero Factory +
Title
Thornraxx +
Type
Set +
USPrice
$8.99 +
Advertisement