XT4 has yellow-coloured feet, that used in several of the Ben 10 sets, including the Humongousaur, and set 2232 Raw-Jaw. He has two sets of knees, one set backwards like in the Star Wars AT-STs and the other, the higher pair, like regular Hero knees. This is due to the fact that the designers used three limb pieces on each leg, instead of two.

The lowest limb pieces of his legs are covered with long black armour pieces, and the two higher ones are bare. XT4’s body is unique, as the ball that is usually extended on a crossbar is set right at the shoulders, without the crossbar ‘neck.’ The parts that the upper arms connect to are the size of regular Hero necks. The leg connections are spaced very close together, only one Technic unit separating them from each other. A second piece with three horizontal balls connects to his back, allowing the second, lower pair of arms to connect on.

The villain’s head is extended forward slightly, due to a neck-extension limb piece, and funnily enough, in this set the eye connects to the helmet, which in turn connects to the neck. This is not so of most of the Hero Factory sets, which have the eyes/head connecting to both the neck and the helmet. XT4’s helmet is made of one brick with three distinct parts; the upper, builder-helmet-like part, the gear-like middle, which is the place that the eye connects to, and the lowest part, sporting several tooth-like projections. His body armour is made up of the smallest of all the armour pieces, and two black cords connect to it, running all the way to two of his four weapons. Also, note that on the picture, XT4 has a hero core on the place where the cords would connect. His arms do not have any armor, except for where the hands should go, similar to Toxic Reapa’s hands. XT4 has four weapons, two striking blades, a laser cutter with an orange laser and two silver claws, and a rotating razor disc slicer. The cords extending from his body connect to the laser cutter and the razor disc slicer.

With help from Black Phantom, Von Nebula, and Voltix, XT4 escaped from the Hero Factory basement, which held the villains, escaping through a black hole to his home planet of Mechna. XT4 and his pursuer, Julius Nex will appear in the Hero Factory episode “The Doom Box.” 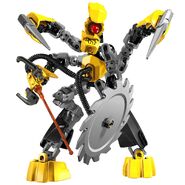 Side, a large saw. 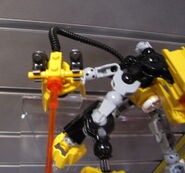 Other side; transparent orange laser.

x12px $17.99 +
Released
2012 +
ShopDescription
This reptilic cylop cyborg is as single-mi … This reptilic cylop cyborg is as single-minded as he is single-eyed. His name stands for “Extra Tough with 4 arms.” He sees more with his one eye than most others do with two (or however many some spieces may have), but his processor has not been designed to deal with emotions. He is not considered to be popular among villains. Some have been known to call him Pink Eye. But not to his face. That would be pretty stupid. (Still, it’s not really fair.) He definitely lacks social skills and would not take insults without adding injury.ld not take insults without adding injury. +  and Teach the heroes the meaning of tough w … Teach the heroes the meaning of tough with XT4!</br> </br>Attention heroes! XT4 has escaped from the Hero Factory and fled to his home planet, Mechna. It won’t be easy to cuff any one of his 4 arms, equipped with razor disc slicers, 2 striking blades and a laser slicer! Be extra careful around this heavy-metal robot!</br>* Features cyborg eye, razor disc slicer, 2 striking blades and laser slicer </br>* Highly flexible and poseable elements </br>* Includes unique code worth 200 game points for LEGO Hero Factory BREAKOUT game online at www.HeroFactory.LEGO.com</br>* Defend XT4 against the heroes with his 4 slicing and striking arms!</br>* Battle with the hero 6221 NEX!</br>* Combine with 6221 NEX for an even bigger model!</br>* Stands over 6” (17cm) tall!igger model!
Theme
Hero Factory +
Title
XT4 +
Type
Set +
USPrice
$8.99 +
Advertisement