Stormer XL is in his largest form ever, an XL variant which is the second largest Hero released. Probably one of the most prominent features are the five mini-probes on his arms, three on the left and two on the right. He wields a double-sided sword and a blue-balled plasma gun. Stormer's feet are new, double-toed, silver pieces, which as of now do not appear in any other set. His lower legs each have two armour pieces, courtesy of an extension to the limb piece's side. His handcuffs are connected to his left thigh armour, and Stormer has a 2.0 body armour piece. However, to make his body larger, the designers added a Hulk-style chest plate with ice-crack stickers. The set retains Stormer's 1.0 helmet.

The top Hero of Hero Factory, Preston Stormer is the leader of the prestigious Alpha 1 team. Before the Rise of the Rookies, before he rose to leader of the Alpha 1 Team, a friend of his, Von Ness, went rogue, blaming their leader’s fall on him, and disappeared. Von Ness turned into Von Nebula, and he targeted Stormer as the principal Hero of Hero Factory. However, with the help of Furno and the other rookies, Stormer defeated Von Nebula. Then in Ordeal of Fire, though he was the opposite element to that of the Fire Villains, he could not defeat them, and retreated to Hero Factory to gain the 2.0 upgrade, returning to defeat the Fire Villains. In this set, Stormer’s Breakout form, he tracks down the speed-crazy Speeda Demon on a blue and white motorbike, which unfortunately is not included in any set. 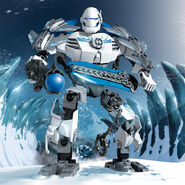 Stormer in the mini-movie "Rocka vs. Black Phantom," only seen in a glimpse. 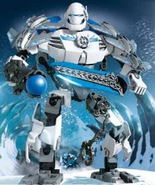 Stormer as he appears on the cover of "Heroes in Action". 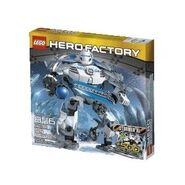 €19.99 +
Released
2012 +
ShopDescription
Battle the toughest villains with an up … Battle the toughest villains with an upgraded STORMER XL!</br></br>STORMER, we have a big problem! The villains have busted out of the Hero Factory and are scattering across the galaxy! You’re equipped with some of our most advanced equipment, like the power sword, hero plasma blaster, scout drones and hero cuffs. Use them to catch up with those villains and cuff them!</br></br>* Features power sword, hero plasma blaster, scout drones, decorated chest piece and hero cuffs</br>* Highly flexible and poseable elements</br>* Includes unique code worth 500 game points for LEGO Hero Factory BREAKOUT game online at www.HeroFactory.LEGO.com</br>* Fire the plasma ball shooter!</br>* Battle with the villain 6231 SPEEDA DEMON!</br>* Combine with 6231 SPEEDA DEMON for an even bigger model!</br>* Stands over 10” (26cm) tall!gger model!
Theme
Hero Factory +
Title
Stormer XL +
Type
Set +
USPrice
$24.99 +
Advertisement