Speeda wears lime green armour, some solid and some transparent. Aside from his neck and his two sword-holding arms, all of his limb pieces are black; all the others being green. His lower arms have small transparent armour pieces, which connect on the other side to curved golden spikes. Solid lime green pieces connect to his upper arms, both with silver extensions, and his wide-shouldered body is covered by a lime-green armour plate with a dark silver shock tower shield on the front similar to a Hero Core. His legs are the size of the larger Heroes, and his front arms are slightly longer than most other Hero Factory builds. His back arms are made of two pieces congruent to Surge's forearms, two lime green hands, and each hand holds a golden Wing Blade, which are also used as the Samurai Mech's sword and in some other Ninjago sets. On Speeda's legs, he wears transparent lime green armour plates, the smallest type, and larger, solid ones with golden spikes on his lower legs. His feet are lime green, the 2.0 version. Speeda's neck is the same length as Surge's forearms, his head is transparent orange, and his helmet is the same shape as Black Phantom's, but in a different colour. Two golden spikes connect to the sides of the helmet.

Speeda's motorbike is made from purple, black, and grey/silver parts mostly, with a few other colours thrown into the mix. It is a two-wheeler, with purple wheels, black wheel hubs with golden spikes, and black tyres. On each side of the motorbike, there is a body armour piece with a shock tower shield that is more to the front of the vehicle than a lightning piece the same as the ones from Surge, which points backwards. Over the back wheel, there is a purple piece also used for XPlode's body armour, and just behind the front one, there are two transparent green BIONICLE Bohrok eyes, under a purple piece that is also used for Stormer XL's flying recon drones, and under the eyes, the handlebars of the bike connect on. Speeda holds the bars with half of each hand, and with the other half, he holds two small lightning pieces like four in the 6283 Voltix set. The handles of the lightning weapons are black, and the lightning itself is part yellow. The lightning has a second colour; in some pictures, blue, in another, green.

Speeda was captured before Breakout started, and was one of the villains freed as a result of Black Phantom, Von Nebula and Voltix's plan. He traveled to the planet Kollix IV to destroy a navigational beacon at the planet's north pole. Stormer XL on a Mach 1 cycle chased Speeda's Nitro Rocket Motorbike over the planet's dangerous ice fields, finally capturing and cuffing Speeda. In the movie, Speeda's armour was rather loose, as parts of it fell off when he crashed after being cuffed. 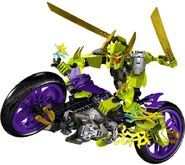