6243 Brickbeard's Bounty is a Pirates set released in 2009. It contains a pirate ship, a rowboat, Captain Brickbeard, three pirates, the Admiral's Daughter, two Imperial Guards, and a Mermaid (the bowsprit decoration). It also included a monkey, a parrot, and a shark big enough to hold a LEGO minifigure or 20 LEGO fish. 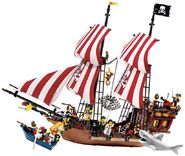 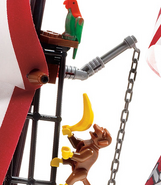