6256 Islander Catamaran is an Islanders set released in 1994. It contains a catamaran, two islanders and a crocodile.

The two included minifigures are King Kahuka and a female islander. The only weapons they carry are three spears, though King Kahuka also has his sceptre. Items on board include a drum with the rare zebra-striped drumheads, and two red parrots which may represent ornaments. 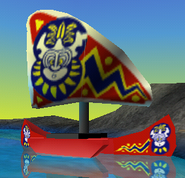 The catamaran in LEGO Racers