When the low-strung Stringer returns to Hero Factory in the second Breakout wave, he wears a new colour; blue! All orange and yellow from his former two modes are gone, and now he sports a transparent blue body armour piece, blue arm armour, and blue thigh armour similar to Surge’s. Black is still there, though, with his former 1.0 helmet, black feet, armour, limbs and hands. He wields a silver sonic blaster with a solid blue sphere. Gunmetal speakers are included on his shoulders, and he has a pair of handcuffs.

An easygoing Hero, Stringer is a member of the Alpha 1 team, and is the only member that enjoys working with rookies. He is an experienced musician, fitting because of his extreme knowledge of sound. 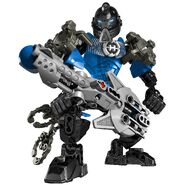 A ROBLOX player as Stringer.

€9.99 +
Released
2012 +
ShopDescription
Give the villains a noisy reception wit … Give the villains a noisy reception with STRINGER!</br></br>Please respond, STRINGER! The villains are on the run from the Hero Factory and must be intercepted! To battle some extra-special villains, we’ve suited you up with advanced amplified armor, sonic speakers, a powerful sonic blaster and hero cuffs. It’s time to track those villains down and cuff them!</br></br>* Features amplified armor, sonic speakers, sonic blaster, decorated chest piece and hero cuffs</br>* Highly flexible and poseable elements</br>* Includes unique code worth 200 game points for LEGO Hero Factory BREAKOUT game online at www.HeroFactory.LEGO.com</br>* Shoot the sonic blaster!</br>* Battle with the villain 6283 VOLTIX!</br>* Combine with 6283 VOLTIX for an even bigger model!</br>* Stands over 6" (16cm) tall!igger model!
Theme
Hero Factory +
Title
Stringer +
Type
Set +
USPrice
$8.99 +
Advertisement