6283 Voltix is a Hero Factory set released in July 2012. The set includes a colourful villain with several lightning pieces.

Voltix wears a helmet that is the same piece as Black Phantom’s. Unlike the other villains with that helmet, however, he does not have any pieces in the double-hole connection parts at the sides; instead, out of the sides of his transparent lime-green head, there are bricks which connect to double lightning pieces, which are smaller than the older ones from Mark Surge. Voltix’s limbs are red and black. His body armour is the same shape as the Hero body armour, but has no printing and is coloured purple. The only other current set with purple armour is 4527 Joker, from the Super Heroes Ultrabuild line. He wears small black armour pieces on his upper arms, with purple coverings over them. His forearms are short, and his hands are red pieces similar to the old BIONICLE hands of the Toa. Voltix’s thigh limb pieces are red, and he wears dark silver armour there, while his lower legs are black with red armour, dark silver coverings going over them. The villain’s feet are black, and he has a third foot-piece on his back, which connects to two lightning pieces shooting out from apparently his shoulders. The set includes four cords, two solid red ones and two transparent ones with blue inners, all of them running from his back to his weapons. Voltix’s main weapon in the series is the dual lightning blasters on his helmet, and he also uses a volt-shooting blaster and a yellow lightning whip.

Voltix first appeared in the start of Episode 8, ‘Breakout,’ being escorted to his holding cell by Furno 2.0 and Rocka. He used something to create a black hole that turned off the energy bars of all the occupied holding cells, enabling all the villains in custody to escape. Traveling to Tansari VI, he tampered with the Energy Collection Array, seeking to make the ultimate electric weapon. Stringer tracked him there, and captured and handcuffed him after a long fight, in which Voltix’s blaster malfunctioned after trying to blow Stringer up with the energy collection cylinders of the Array. However, as Tansari was a misty planet, Stringer was unable to get back to the Hero Factory before Black Phantom was caught. The reason he put was ‘Well…I couldn't find where I parked my Hero Pod.’ 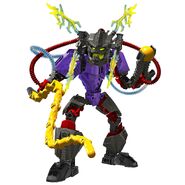 Voltix as seen in the mini-movie “Breakout Part One,” which contains segments of the official Hero Factory Breakout movie. 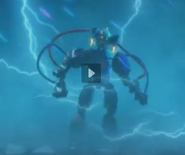 Voltix in the mini-movie “Breakout Part One,” about to disappear into the black hole that he, along with Von Nebula, created. 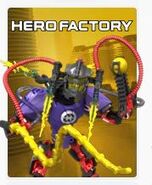 Voltix as the new Hero Factory logo on LEGO.com.

x12px $24.99 +
Released
2012 +
ShopDescription
Stop the heroes from getting the shock … Stop the heroes from getting the shock of their lives with VOLTIX!</br></br>Calling all heroes! VOLTIX is on the loose from the Hero Factory and is trying to disrupt the power supply at the Tansari VI energy collection array. With a ball shooting volt blaster, dangerous lightning whip, electricity spark elements and a voltage booster switch, he’s got the tools to do some real damage. Stop him before it’s too late!</br></br>* Features ball shooting volt blaster, lightning whip, electricity spark elements and voltage booster switch</br>* Highly flexible and poseable elements</br>* Includes unique code worth 300 game points for LEGO Hero Factory BREAKOUT game online at www.HeroFactory.LEGO.com</br>* Battle with the hero 6282 STRINGER!</br>* Combine with 6282 STRINGER for an even bigger model!</br>* Stands over 7" (20cm) tall!igger model!
Theme
Hero Factory +
Title
Voltix +
Type
Set +
USPrice
$12.99 +
Advertisement