6286 Skull's Eye Schooner a.k.a. Dark Shark II or Black Skull is a Pirates set released in 1993. It includes a large three-masted pirate ship, nine pirates, a rowboat, and a shark.

The Pirates, led by Captain Redbeard, are a powerful force of renegades. No Imperial treasure is safe when these seafaring mates are around. Their sailing ships are as fast as anything in the Imperial fleet. Their island outposts are fortified and well hidden. Whether on sea or land, they are a strong adversary for Governor Broadside and the Imperial Guards.

The Pirate adventure really begins with you, the LEGO Maniac®. Using your imagination and the building sets from the LEGO SYSTEM? Pirate collection you can create your own exciting high seas adventures. Who will control the enormous royal treasure, the Pirates or the Imperial Guards? Only you can decide because... you're in control of the action... you're in charge of the fun... you're the LEGO Maniac!

The ship is armed with four cannons, although the four hatches on each side suggest a twice as big armament. The cannons are attached to 4x4 turntables that can slide all the way from port to starboard, allowing them to be easily positioned on either side of the ship. There are also two smaller brick-built cannons on either side of the poop deck, but those are not functional. 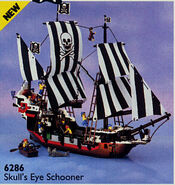 The schooner in LEGO Racers