Brickipedia
Register
Don't have an account?
Sign In
Advertisement
in: Class 4 articles, Sets listed for ages 8-12, Pirates,
and 2 more

6290 Red Beard Runner (also known as the Pirate Battleship) is a Pirates set released in 2001. It contains a two-masted pirate ship with a dinghy and seven pirate minifigures, including Captain Redbeard.

Captain Redbeard and his renegade Pirates want to get their hands on the Imperial gold.  With the building sets from the LEGO SYSTEM Pirate collection, only you, the LEGO MANIAC, can help keep the gold with its rightful owners. 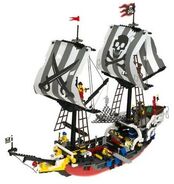