6336 Launch Response Unit is a Launch Command set released in 1995. It contains a semitrailer truck with a helicopter and two Crewmen.

At the trailers aft is a computer console hidden under under a flip screen. It comprises a radar screen and a keyboard. The computer screen shows a view of the earth and a satellite. In front of the computer is an extendable dish antenna mounted on a 2x2 turntable, that can be collapsed to lie flat on the closed flip screen when the helicopter is transported.

The chopper has a video camera mounted on its left and a flashlight on its right.

The truck was six studs wide, which was a rare occurence in that era. 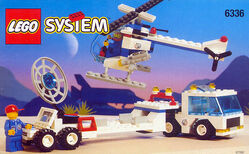 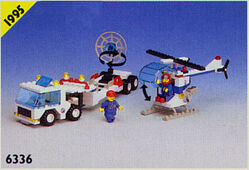 Retrieved from "https://brickipedia.fandom.com/wiki/6336_Launch_Response_Unit?oldid=1968369"
Community content is available under CC-BY-SA unless otherwise noted.