6346 Shuttle Launching Crew is a Town Flight set released in 1992. It contains a semitrailer-truck with a space shuttle on its trailer and an escort consisting of two motorcycles and a car, as well as five Minifigures, including an astronaut.

The shuttle's cargo bay contains a gripper arm and a small satellite. The orbiter is similar in design to the one from 1682 Space Shuttle but this time the vehicle belongs to a fictional space agency whose logo consisted of red and blue lines with a hook. A pattern that was repriced in the Launch Command theme from 1995. 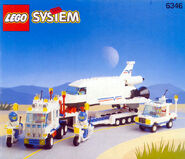