6348 Surveillance Squad is a set of LEGO Town's subtheme Rescue and was released in 1994. It contains a police truck with a semitrailer, a motorcycle, and three police officers.

The semitrailer contained a mobile command centre. The interior could be accessed by tilting up the roof and the right side. The tractor unit contained a "sleeper" at its back, which didn't provide enough room for a minifigure though. The set also included a barrier and two red traffic cones. 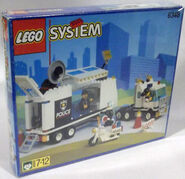 The box.
Add a photo to this gallery