6389 Fire Control Center is a set from Town's subtheme RSQ911, and was released in 1991. It contains a fire station, a fire engine, a pickup truck, a helicopter, and four firemen. 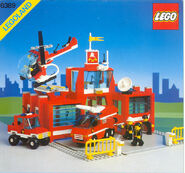