Brickipedia
Register
Don't have an account?
Sign In
Advertisement
in: Class 1 articles, Sets listed for ages 7 - 12, Paradisa,
and 3 more

6414 Dolphin Point is a Paradisa set released in 1995. The set contains a lighthouse, four minifigures, a dolphin, and many more rare and exclusive parts. The set is made up of 198 pieces. It is reccomended for children aged 7 through to 12.

The lighthouse is included with two stories holding an ice cream parlor and a small kitchen on the first floor that is accessed by a curved outdoor staircase. The ice cream shop contains a chest freezer, signboard, and various types of ice cream layed outside. The kitchen on the top floor contains a cabinet with tap and a coffee machine. On the roof of the building is a large lantern and a fixed telescope.

Outside the lighthouse is a table with two seats, a sunshade, and a fireplace for barbecues. On the table are two plates with food, made up of printed round 2x2 tiles, (which were only available in this set) and two clear goblets. Another accessory is a portable radio/tape player (preprinted 1x3 brick). The set also included a palm tree.

The baseplate that comes with the set is one of the new exclusive pieces that only appears in this set. It is 32x32 studs long and has a dark blue border. The next colour is lighter blue that waves up and down into the darker blue. The next border is light tan to represent sand like at a real beach. The final layer is green that is in the middle where the lighthouse went.

The first woman features a set of yellow legs and a torso with a picture of a sunset on it. She has a yellow head that has a mouth covered in lipstick. She also comes with the classic ponytail hairpiece.

The second woman features like the first woman a set of yellow legs but a torso with blue flowers on it. She also comes with a yellow head with a mouth covered in lipstick and the classic hat piece.

The first vacationer has a yellow life preserver and a head with sunglasses on it. He has no printing on his torso and has yellow arms. He comes with a classic male LEGO hairpiece.

The second vactioner has a white hat like the second woman but a headpiece that fetures a mustache. He has a torso with a picture of a sailboat on it with white behind it. He features a set of the classic leg piece (Part 970c00). 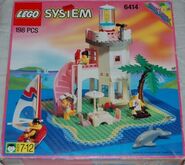 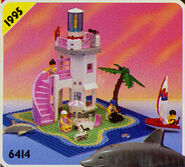 The sticker sheet that comes with the set

The preprinted crab that comes with the set 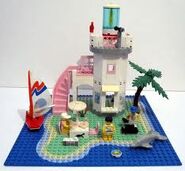