6419 Rolling Acres Ranch is a Paradisa themed set released in 1992, that includes a ranch with horses. It contains three minifigures, and, at 364 pieces, is the largest Paradisa set.

The set contains two main buildings, which have a white fence in front of them, with an archway in the middle of it. The archway has a plaque with a picture of a running horse and a palm tree attached to it. The set has a total of three horses, one white, one brown and one black. The set also contains a cart that can be attached to a horse, a car with a horse trailer, a whip and a palm tree. Also included were three minifigures- one female horse rider in a red coat and black pants, one female minifigure in a pink and gray shirt and gray pants and one male in a blue and white striped shirt and white pants.

The first of the two vehicles included in the set is a dune buggy-like car, which is made primarily of plates built over a classic car base part. In the buggy's middle is an indentation protected by a large windshield, into which a minifigure can be placed. The majority of the vehicle is white, but it has several pink plates placed atop it.
A horse-trailer can be attached to the back of the car. The trailer is primarily white, but with some spots of light grey and pink. It is hollow, and a horse can be placed inside it.

The second of the two vehicles is a cart, which simply consists of a wheeled platform on which a minifigure can sit or stand, that can be attached to a horse by means of a reign piece.

The set's two buildings are built over two separate baseplates, one 32 X 32, and the other about half that size. At the edge of the largest baseplate, there is a studless rode imprinted into it, which separates the two buildings from each other.

The first of the buildings is a small room for storing equipment. Inside it is a pink fence on which two saddle are mounted, and a small shelf with a brush and a bucket mounted on it. There are several ways into it, only one of which has a door (although even that is just two smaller door mounted one above the other). It has a roof that is made with two large slanted pieces printed with stone, mounted partially on top of three plates-one straight, the other two slanted.

The second building is a stable, and is located on the smaller of the two baselates. It consists of two stalls, both of which have shelves topped with feed buckets in them. The fence that covers the front of the set here twists around, to create a small paddock. The stable's roof is made entirely of slanted parts.

A postcard featuring this set, and several others. 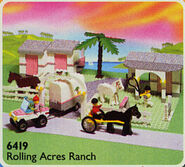 Another image of the set