Brickipedia
Register
Don't have an account?
Sign In
Advertisement
in: Class 2 articles, Sets listed for ages 8-12, 6000 sets,
and 3 more
English

6456 Mission Control is a Space Port set released in 1999. It contains a shuttle and satellite that can be carried in the shuttle's cargo bay, a launch pad with a mission control center, fuel pump and meteor holder, a meteor, and a moon buggy to carry it.

The shuttle is composed of three separate parts that can be easily separated, allowing the middle section, the cargo bay, to be removed, creating a smaller shuttle. The cargo bay contains a robotic arm which can lift the satellite in and out of the bay. The engine section of the shuttle is mostly composed of a battery-powered light and sound system that can play pre-set sounds and flash the lights in the engine when activated, and is powered by 3 standard AA batteries. Also the main launch tower is most unique. It has a gang-plank, and a swinging clamp arm. The mobile pad in witch the shuttle sits is actually a LEGO-version of a "NASA crawler" that attaches to the tower. 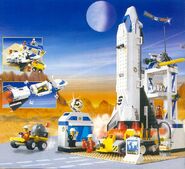