Brickipedia
Register
Don't have an account?
Sign In
Advertisement
in: Class 4 articles, Sets listed for ages 5-8, Fire,
and 4 more

6478 Fire Station is a City Center set released in 2000. It contained 231 pieces, including 4 Minifigures. The station was featured in the video game LEGO Racers 2 as the base of Fireman Gavin. The red and black fire truck also appears as Gavin's vehicle but it is also drivable on Sandy Bay. 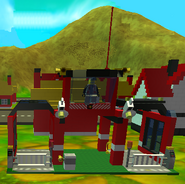 The station in LEGO Racers 2

The truck in LEGO Racers 2