The Polar Base comes with 7 different bags, them being for the Ice Vehicle with "Tank Treads", the Helicopter, the four different sections of the base (each in a different packaging), and a snowmobile. 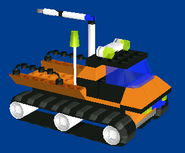 The Ice Truck in LEGO Racers 2

The main base building in LEGO Racers 2

The smaller building in LEGO Racers 2

$59.99 +
Released
2000 +
ShopDescription
The closest thing to civilization for 1 … The closest thing to civilization for 1000 miles!<br />You’re in charge of the action at the base camp -- center of the biggest Arctic exploration in history. Includes a control tower, rescue helicopter, snow treaker and medical facility. Plus all the gear you need for braving the elements -- polar hats, binoculars, ice picks, snow shoes and a stretcher for rescues. Dangers lurk everywhere. Not just the icy cold, but hungry polar bears, too! Includes six Arctic explorers.bears, too! Includes six Arctic explorers. +
Theme
Arctic +
Title
Polar Base +
Type
Set +
USPrice
$59.99 +