6600 Highway Construction is a City Center set released in 2000. It contains a highway construction site with a crane, a dump truck, a loader, a small police truck, four construction workers and a policeman.

The dump truck in LEGO Racers 2

The loader in LEGO Racers 2 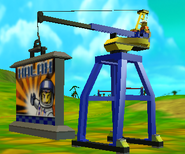 Retrieved from "https://brickipedia.fandom.com/wiki/6600_Highway_Construction?oldid=1199577"
Community content is available under CC-BY-SA unless otherwise noted.