Brickipedia
Register
Don't have an account?
Sign In
Advertisement
in: Class 4 articles, Sets listed for ages 7-12, 1996 sets,
and 3 more

6761 Bandits' Secret Hideout is a Western set released in 1996. It contains an abandoned gold mine, three horses, a cannon, a Cavalry Lieutenant and a Cavalry Soldier, and three Cowboys. It has 238 pieces.

The hideout is built onto a baseplate with a curved road and is basically an abandoned gold mine and has mine cart tracks sticking out of the main entrance on the ground floor that leads into the rock formation. Instead of a minecart, there is a cannon on the tracks. Next to the entrance is a sign with a skull that tells trespassers to "Keep out". On the second level is a small log cabin that can be reached via a staircase from the outside. The rocks stretch over the whole two floors and are hollow on the inside. On top of them is a small outlook with three rifles mounted on a turntable. Outside of the mine is a large tapped water barrel.

The two mounted cavalry officers escort another horse that carries a safe and a box with a rifle.

This set contains a large amount of fire arms, including six revolvers and eight rifles. Also included are a 1x2 tile with playing cards, a 1x2 tile printed with dynamite sticks, a grey bird, a pickaxe, three cutlasses and a bugle. 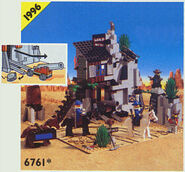