Brickipedia
Register
Don't have an account?
Sign In
Advertisement
in: Class 2 articles, Sets listed for ages 6 - 12, Futuron,
and 2 more

6828 Twin-Winged Spoiler is a Futuron set released in 1988. It contains a spacecraft and a blue Futuron astronaut.

The "wings" can be swept down to act as support struts when the spacecraft rests on the ground. In this landing configuration, the vessel looks like a walking mech, except the fact that the "legs" can't move.

The included astronaut was one of the first minifigures with a movable visor on the helmet. 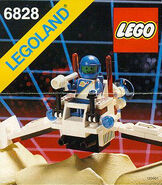