6864 Batmobile and the Two-Face Chase

Batmobile and the Two-Face Chase

6864 The Batmobile and the Two-Face Chase is a DC Universe Super Heroes set released in 2011. It includes Batman, Two-Face, two Henchmen, a Guard, a bank, the Batmobile, a bank safe, and Two-Face's getaway truck. This set, like all the larger Super Heroes sets, includes a comic book.

The set is made up of three main parts; The bank, Two-Face's car, and the Batmobile.

The bank is a tan coloured building. It has a door on its left side above which is a black sign with yellow letters reading "BANK". The bank has a large window that takes up most of the front wall. The window seems to be removable, to allow Two-Face's car to steal a green safe using its crane.

Two-Face's car follows his split-motif with orange on the its right side and purple on the left. The car has large, light grey wheels and four black bars as a bumper. Above, the split-motif starts with the vents in between the transparent headlights. The style continues across the hood and eventually reaches a large, smoky windscreen. Both sides have small rear-view mirrors in the colours of their respective sides. The car's basic design is not mirrored all the way the way through, and on the sides are two different weapons. The orange side has two, red flick-fire missiles, while the other has a rounded laser cannon made out of four binocular pieces. On the back of the car is a crane used to retrieve the bank's safe. It is on a rotating plate, so that it can swivel and still continues the split-motif up its arm, but ends when the connection rod turns grey.

The Batmobile has four yellow wheels with sleek, black tires. The front of the Batmobile slopes upward, but in three parts; the two sections with the headlights raise up highest, while the center section raises only slightly, and only reaches the height of the headlight sections when the slope turns of to the right, and to the left. Behind this section is the cockpit for Batman. It is covered by a smoky windscreen. On the inside of the cockpit is a red seat for Batman. Between to two wheels, the Batmobile's design dips in a little. Above the back wheels are two large bat-wing fins.

This scene depicted in the set is not based on any particular scene from the Batman franchise. However, the set description suggests that Two-Face is simply robbing the included bank, and Batman intervenes. 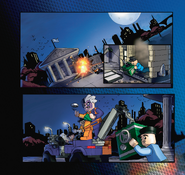 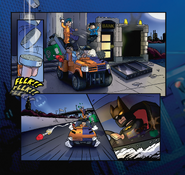 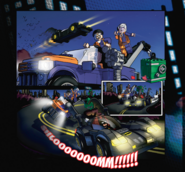 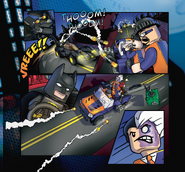 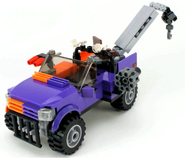 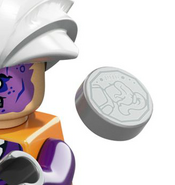