This set includes a dark blue S.H.I.E.L.D. pick-up truck, with flick-fire missile and in the back there is a launcher where Loki is to blast him off the truck driven by a mind controlled Hawkeye. Also included is Iron Man to chase after Loki and Hawkeye.

Loki, having travelled to Earth through a portal, acquired the Tessarect (also known as the Cosmic Cube) from a S.H.I.E.L.D. base, neutralizing scientists and agents guarding the area. Loki used his staff to take control of Hawkeye's mind. Taking a S.H.I.E.L.D. 4X4, Hawkeye and Loki fled from the base as it was destroyed from the effects of the Cube. Loki and Hawkeye managed to escape, after being pursued by several S.H.I.E.L.D agents including Director Nick Fury.

The set from Toyfair. 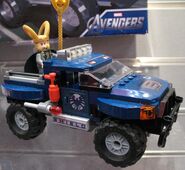