Brickipedia
Register
Don't have an account?
Sign In
Advertisement
in: Class 3 articles, Sets listed for ages 7-12, 6000 sets,
and 2 more

6881 Lunar Rocket Launcher is a Classic Space set released in 1984. It contains a mobile launcher with a rocket, and one white Classic Space astronaut minifigure.

The launch vehicle has two hoses mounted on its sides. It also has eight wheels. It features a launch rocket. On the tip of the rocket is a detachable satellite/probe. 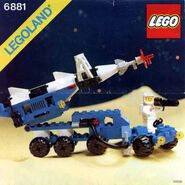