6882 Walking Astro Grappler is a Classic Space set released in 1985. It includes a quadrupedal "walker" and Spaceman Jens.

The legs could move back and forth through the use of a system of several 2x2 turntables. A similar mechanism was featured in the set 6940 Alien Moon Stalker. Since the two legs on either side are rigidly connected with each other it had the same effect as if the vehicle had only two legs. On either side of the cockpit is a small storage box. 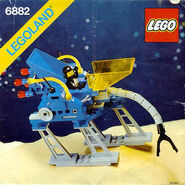