6885 Crater Crawler is a Futuron set released in 1988. It contains a wheeled ground vehicle, a small flying scout vehicle, a robot, and a black Futuron astronaut. 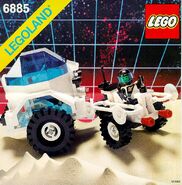