6912 Super Soarer is a Creator set that was released in late 2011. It contains 130 pieces and can be built into a jet plane, a helicopter or a boat. It is recommended for children aged 6 through to 12.

The set contains 130 pieces, mainly in Yellow, White, and Earth Blue, which are used to build the set's main model, a small jet, as well as two alternatives, a helicopter and a speedboat.

The jet has retractable landing gear, as well as Transparent Yellow 1x2 plates on the underside of the air intakes to represent vertical thrust nozzles.

The helicopter also has retractable landing gear, as well as a spinning rotor and small fins on the sides.

The speedboat has two engines, one on each side, a spoiler at the back, and, although the set is not designed to be Minifigure scale, this model can seat a minifigure. 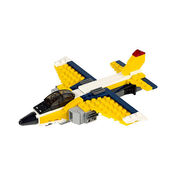 One of the set's alternative models

x12px $22.99 +
Released
November 2011 +
ShopDescription
Soar through the sky with this amazing … Soar through the sky with this amazing 3-in-1 stunt jet!</br></br>Amaze the crowds with this daring stunt jet! Raise the landing gear, and try the most daring maneuvers ever! Deploy the landing gear and hear the crowd roar! Rebuild it into a powerful helicopter with spinning rotors or a super-fast speedboat.</br>3 models in 1: rebuilds into a powerful helicopter or a super-fast speedboat</br>Includes a reusable storage can</br>Deploy the Super Soarer’s landing gear!</br>Spin the helicopter’s powerful rotors!</br>Measures over 7” (18cm) long and 7” (17cm) wide</br>Helicopter measures over 8” (21cm) long</br>Speedboat measures over 5” (14cm) longong Speedboat measures over 5” (14cm) long +
Theme
Creator +
Title
Super Soarer +
Type
Set +
USPrice
$12.99 +