6941 Battrax is a Blacktron set released in 1987. It contains a wheeled ground vehicle and one Blacktron Astronaut.

Like other Blacktron vehicles, the Battrax had several detachable modules that could be recombined. The cockpit could be attached to a wing section with antennas, that is usually mounted on the vehicles back, to form a smaller spaceship. The sections were also compatible to other Blacktron sets that used the same interfaces, like 6954 Renegade, 6894 Invader or 6876 Alienator.

The cockpit is quite spacious and could actually house an additional minifigure. The wings on the detachable module could be swept forward via hinge-plates.

Both sections are docked to the articulated vehicle frame. Other details include two tool compartments at the middle and slanted motor cylinders at the end. 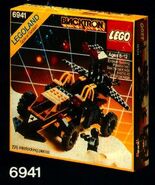