Brickipedia
Register
Don't have an account?
Sign In
Advertisement
in: Class 2 articles, Articles with conjectural titles, Sets listed for ages 6-16,
and 5 more

6945 Bad Guy is a relatively small set with only two limbs. The limbs are legs, and have mouth/pincer attachments. A sphere can be shot from the center. On top of that is a rotatable head. 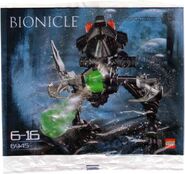