6951 Robot Command Center is a Classic Space set released in 1984. It contains a giant robot, a rover, a small spacecraft, a small rocket and three Classic Space astronauts (black, red and yellow). It has 278 pieces.

The giant robot consists of a large cockpit section positioned on two large pylons. Each of those immovable legs is equipped with a flexible grapple arm, two storage boxes and searchlights mounted on a hinged fixture. The head section housed two cockpits with steering wheels and computer monitors. Both cockpits were open to the rear and had foldable roofs. At the top was a large rotable dish antenna.

The rover and the spacecraft could be docked on TECHNIC pins between the legs. The rocket could be mounted at the rear of the structure.

The small spacecraft could fold its wings to fit inside its docking port. 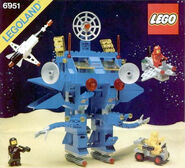 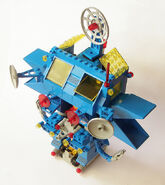 Retrieved from "https://brickipedia.fandom.com/wiki/6951_Robot_Command_Centre?oldid=1968535"
Community content is available under CC-BY-SA unless otherwise noted.