6954 Renegade is a Blacktron set released in 1987. It contains a large spaceship with two smaller spacecrafts and a small ground vehicle and two Blacktron Astronauts.

This is the biggest spaceship of the Blacktron faction. It consists of several modules that could be detached and recombined, such as the cockpit section, the cargo container at the ship's aft, and a sensor/antenna assembly. They were also compatible to modules from other Blacktron sets that had the same interfaces, like 6941 Battrax, 6894 Invader, or 6876 Alienator.

The detachable sections were all docked to the back section with the wings on which the smaller two one-seated spacecraft were parked. The ground vehicle was stored in the cargo container.

The ground vehicle is Black and Yellow, with power cells/lasers on it.

The main vehicle is made of three modules: the "wings" and the

The command module is small and fits one minifigure. It is equipped with five lasers, one in the center and one on each side, with two more that are attached to swiveling pieces. There is a control panel outside of the cockpit.

The wing module is the largest portion of the set. It makes up the frame of the whole set. It has two places to which modules of Blacktron ships may be attached. It is equipped with a pair of large lasers as well as with next could be more small lasers. It has a pair of joysticks/antennae on it, as well as a control panel. In addition to this, it has some places on which a pair of loudspeakers can be placed.

The other module that attaches to the front is a double laser.

The transport module fits into the back section of the Renegade. It has a pair of lasers on it and carries the ground vehicle. 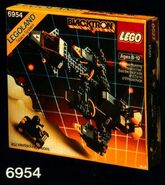 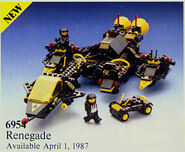