Brickipedia
Register
Don't have an account?
Sign In
Advertisement
in: Class 2 articles, Sets listed for ages 8-12, 1992 sets,
and 2 more

6957 Solar Snooper is a Space Police II set that was released in 1992. It includes a large truck with a trailer, a modular jail cell, a small spacecraft, two Space Police officers and a Blacktron II prisoner.

The small spacecraft stored on the trailer can accept one jail cell in its center section by stretching out in a similar fashion as 6897 Rebel Hunter. The Solar Snooper is the largest Space Police II land vehicle. It has two cockpits, one above the other. It has a detachable trailer, which is roughly the same size. The trailer has carries a spaceship. The spaceship double cockpit and a rocket booster. It has two thrusters on the bottom, which could also be used as rockets. The set is a mix of red, black, transparent green, and old grey.

To fight the forces of Blacktron Future Generation, the people of M-Tron enlisted the help of the Space Police. 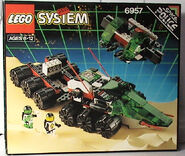