The set is made up of black pieces. In the middle of the set is a 1x1 brick with 4 studs on all of its sides. The front side has a transparent dish, while the back has a sand blue dish. The set has 4 wings, two on the top, and two upside-down on the bottom, all with 1x2 black tiles on them. In the middle of the wings on both sides are two dark stone grey sticks, representing the guns. 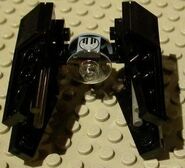 Front of the Kabaya release box. 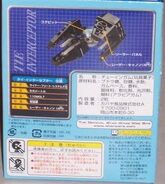 Back of the Kabaya release box.
Add a photo to this gallery

Retrieved from "https://brickipedia.fandom.com/wiki/6965_Mini_TIE_Interceptor?oldid=1855182"
Community content is available under CC-BY-SA unless otherwise noted.