The fighter represents Anakin Skywalker's starfighter and is mainly built out of Yellow and Dark Stone Grey pieces. There are some in Black and Transparent Brown. There is also one piece in White, a single stud to reperesent an Astromech Droid.

The main body coupled with the shape of the wings gives this set a roughly oval appearance. The cockpit is made of of two transparent pieces set close together. Two blasters are mounted on the inside of each wing. The wings are on either side and can be moved up or down. Two flaps are on the edge of each wing, which help the ship stabilize.

Anakin's Jedi Interceptor is bright yellow, a colour he says he picked because it was the colour of his podracer. Others, however, suspect he chose the colour because it attracts more enemies with its eye-catching colour. Anakin used this starfighter most notably during the Battle Over Coruscant. 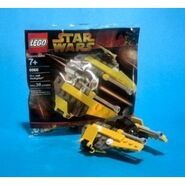