6973 Deep Freeze Defender alternately named ice cruiser Zycon IV in the UK and Japan is an Ice Planet 2002 set released in 1993. It contains 3 minifigures and a large spaceship similar to 6982 Explorien Starship.

The Deep Freeze Defender consists of four separable modules (thus resulting in it being called a modular spaceship) that could be rearranged to form two smaller spaceships. The central section contains a rocket. When its top lid is opened the missile is erected into firing position.

A sled is also included. It is slightly larger than the Space Scooter. A magnet on the side allows it to collect the rocket, and a slot in the back allows it to dock and be stored inside the ship. It has no weaponry, and is a one-man vehicle. On top of it is the Ice Planet 2002 Logo and a pair of snowshoes. Also included is a rocket and a small satellite modelled after Sputnik. The rocket and satellite are the same as those in the Ice Sat-V. It has a magnet on it, allowing it to be carried by a ship, and the satellite can be attached on top.

The front sections of the ship are two cockpits, both symmetrical and the congruent. On the bottom of each ship are a pair of TECHNIC skis. They each carry two snowshoes, a buzzsaw, and a torch/laser. Each ship has two thrusters, one on each side. Their cockpits open and inside of each are a pair of griller plates and a control panel. The colour scheme of this section is Blue, with some Black, White, and Transparent Neon Orange. They can be attached to the main section with a Half-TECHNIC pin brick.

The middle section is almost twice as long as the cockpits and excluding the wings is just as wide. The centre part can be lifted, along with the "windshield" piece, revealing a rocket. The rocket is kept in place (but not attached) by the axle end of a TECHNIC pin/axle piece. There is a pair of fins and a small pair of wings on top of this section. Directly in front of this is the TECHNIC beam to which the cockpit ships attach and a satellite attaches. There are two round black domes on these wings and in front of them two plates printed with an arrow right where the cockpit ships attach to the centre. Behind the front wings are a pair of wings sticking directly outwards. There is a grille plate on the end of each wing and a plate with the Ice Planet 2002 Logo printed on it on each wing. On the bottom of the section there are 6 white thruster/laser pieces. The colour scheme of this section is Blue with some Black and White.

The third section is taller than the others and about as long as the second section. It connects to the middle section with a pair of TECHNIC pin bricks. A pair of parts with arrows printed on them also go over and attach to slopes in the central section. The section contains garage door parts serving as a roof. A pair of thrusters/lasers can be moved, allowing the door to open and the smaller ship to be raised into launch position. The smaller ship slots onto the mechanism, which is made of a "step" brick, some TECHNIC parts, some plates and two tiles The section's back is made up of three transparent neon orange "angled" wall panels, and there are four more on the sides, along with two corner ones in the front. On the sides there are two thrusters attached with a cord going through the walls to another pair of thrusters on the wings. On the wings there is a slope brick with the Ice Planet 2002 logo, the aforesaid pair of thrusters, and a laser. There are two fins, each with thrusters, on top of the section in the back. There are 6 thrusters/lasers on the bottom of the section. The overall colour scheme of this sections is Blue, with a large amount of Transparent Neon Orange and some Black and White. On the back of the instructions are three alternate models.

The Deep Freeze Defender is the largest ship of the Ice Planet Star Fleet.

The defender in LEGO Racers.

The back of the ship sections.

The Sides of the Ships.

The back connection of the central section.

An overhead view of the central section

The top opens, revealing a rocket

The Rocket with Satellite

The back of the rear section

The wings on the back 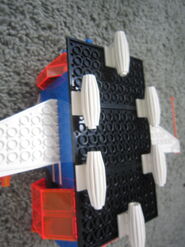 The bottom of the rear section 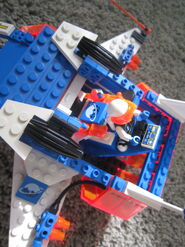 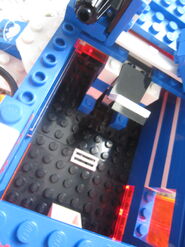 The mini ship inside the rear section