Brickipedia
Register
Don't have an account?
Sign In
Advertisement
in: Class 2 articles, Sets listed for ages 7-14, Legends of Chima,
and 2 more
English

70000 Razcal’s Glider is a 109 piece Legends of Chima set that was released in 2013. It includes the minifigure Razcal.

The set includes a small black and purple glider that resembles a raven. The glider has the function of launching a chain backwards. Also included is a Razcal minifigure.

The glider consists of a “raven head”, a small seat, where Razcal can sit, four wings, a tail, claws on the bottom, and a stud on the back where you can put a Chi crystal. The “head” has a light grey rubber piece representing a beak, two transparent red studs for eyes, and a few other pieces for detailing. The seat is 2x2 studs, and has a 1x2 light grey piece on the back. There is a small bone used for a steering wheel. The wings are four black pieces, attached to the glider via dark grey robot arms. The wings can be moved and arranged in many different positions. The tail uses the same piece as the wings but in purple, attached to their using a dark grey robot arm. There are also two other purple pieces, which are actually a part of Razcal’s weapon, on the wings attached by black Star Wars Battle Droid arms. The three tail pieces can be moved up and down. The claws are made out of the same pieces that hold the wings, but in dark red, and with white fangs on them. Next to the claws, there is a feature that allows you to push a TECHNIC piece that makes a flick-fire missile attached to a chain fly out. The back section where the Chi crystal fits is simple. The chain that holds the flick-fire missile is attached to there on one side, and on the other is the second part of Razcal’s weapon. There are two printed pieces on both sides behind the seat. 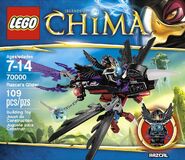 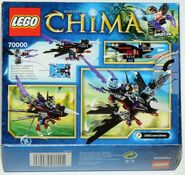 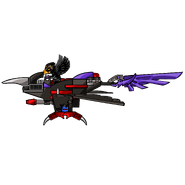 The set as it appears in Laval Unleashed