The Pack Tracker is a large truck that is mostly coloured in grey. The front is given the appearance of a wolf’s head through the use of white tooth elements, a black sloped piece for the nose, some red plates for the tongue, translucent red studs for the eyes, and grey bricks for the rest. When the vehicle moves the jaw opens and closes by a cam on the front axle. The wheels are large, with thick black tyres and sand red hubcaps. Some white tooth elements are attached around the edge of each tyre and function as spikes. In the back of the truck a large firing cannon is mounted, and it’s firing mechanism is activated by pulling back a small lever. Next to the cannon, a small flag is situated. On both sides of the truck at the rear are two large sand red upwards-facing exhaust ports. At the rear of the truck is a chain with some tooth elements attached at the end. The chain can be raised and lowered, but the purpose of the attached tooth elements is unknown. 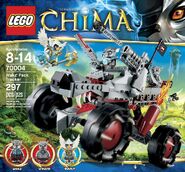 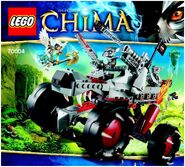