In the TV show, the Croc Swamp hideout is the royal palace of the Crocodile Tribe. The mouth is activated by a single lever, which Cragger and Crooler use to close the mouth when the Ice Tribes invade, though Mungus later lifts it up. It also has an underground dungeon, where criminals are wrapped up in multiple chains tied to the ceiling and floor. It features a bland throne room, which has little to no decoration except for the throne in the back of the room.

The croc swamp hideout is a massive fortress with a crocodile head and some swampy plants on it. On the upper right side there is a massive turret with four flick fire missiles. The upper left side has a crane with a cage attached, manned by Crug. In the center, there is a two way flag with croc symbols and a throne for Crominus, who is holding a blue CHI crystal. The snapping croc mouth has a golden CHI crystal inside, and is guarded by Cragger.

The lion boat is more advanced than the Jet skis in 70006 Cragger's Command Ship. It has two flick fire missiles on the sides, fangs in the front, a propeller on the back, and a seat which has two levers, presumably used for moving the boat. 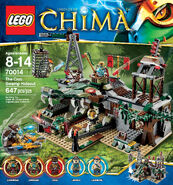 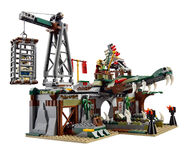 Another view of the set

As seen in the TV Show