70113 CHI Battles is a Legends of Chima set released in 2013. It includes Longtooth and Wakz minifigures, their respective Speedorz, and several obstacles, cards, and accessories.

Two Speedorz are included, one yellow with a lion motif and spikes in the back, and a red one with a wolf motif and chainsaws in the back.

Included are two, green ramps which the Speedorz can jump off of toward a pole. The pole is brown with green foliage hanging off of the sides of a basket at the top which holds a blue orb.

Four, spiked cones are included. Two have yellow bases while two have red.

A top is included which holds a shaft with a blue jewel inside. 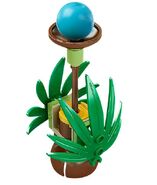