Brickipedia
Register
Don't have an account?
Sign In
Advertisement
in: Class 2 articles, Sets listed for ages 7-12, Legends of Chima,
and 3 more
English

70115 Ultimate Speedor Tournament is a Legends of Chima set released in 2013. The set includes a CHI pedestal, a Lion training sculpture, a ramp, and two Speedorz.

The set includes minifigures, weapons and speedorz such as Laval and the Defendor XII (Speedor), Unnamed Sawblades, Jahak (Secondary Weapon), and Valious (CHI Weapon). It also includes Cragger and the Chompor V18 (Speedor), Unnamed Axeblades, Gronk (Secondary Weapon), and Vengious (CHI Weapon). The set also includes a Lion sculpture with a target that when hit, will launch the orb of CHI upwards. The Lion Sculpture is made primarily of yellow pieces and brown pieces. The sculpture is on top of green diagonal plates with white sharp pieces, or claws on top of them. Two arch pieces and two brown arches make up the Lion's legs. The Lion's eyes are light blue diagonal 1x1 tile pieces. The Lion's head is yellow with brown sharp pieces as well, representing the Lion's mane. The Lion has two black pieces making up its nose, and its mouth is tan. Below the mouth are two small and two big white teeth and the target made up of one white dish piece and one red smaller dish. The set also includes a ramp, a dark green plate with foliage and is held up two rubber TECHNIC connector pieces to prevent the ramp from moving. A CHI pedestal is also included, made up of two green plates with foliage on the top, and two dark tan diagonal arch pieces, with 2x2 round pieces, two white teeth, two 1x1 brown diagonal tiles, and a transparent blue bowl containing the orb of Chi that can be knocked over. Two torches are also included, made up of a dark grey cone and a fire piece on top. Twelve fragments of Chi and two Ripsticks, yellow and green are included also. The Cards included are: Laval, Defendor XII, Valious, Tratratrax, Jahak, Cragger, Chompor V18, Vengious, Grapt, and Gronk.

Speedorz were vehicles used by the characters to battle with one another or travel across the land of Chima. They were also used to compete for CHI by jumping through rings, knocking over obstacles, dodging obstacles and other challenges. Speedorz were shaped like the head of the animal who rode them.

Cragger and Laval were among the most renowned Speedor champions in Chima and were often the last two standing at the end of a tournament. 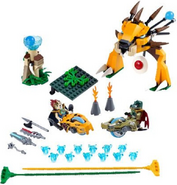 x12px $49.99 +
Released
2013 +
ShopDescription
Enter the Ultimate Speedor Tournament! … Enter the Ultimate Speedor Tournament!</br></br>Deep in the lion territory of Chima, the tribes are gathering for the Ultimate Speedor Tournament. Attach Laval and Cragger onto the Speedorz. Then pull the rip cord to speed through the lion’s mouth and release the CHI! Fly up the ramp, hit the CHI tower and release even more CHI! Attach the power-upz to make the Speedorz wider for additional battling power! Set includes 2 minifigures, 4 weapons, 2 Speedorz, 2 rip cords, 2 power-upz, ramp, 2 fire cones, 12 CHI and 10 game cards. Put your skills of accuracy and timing to the test with this game for 1 or more players!</br></br>*Includes Laval and Cragger minifigures with 4 weapons</br>*Features lion’s mouth with target and CHI launch function, CHI tower, 2 CHI orbs, ramp and 2 fire cones</br>*Also includes lion and croc Speedorz, 2 rip cords, 2 power-upz, 12 CHI and 10 game cards</br>*Weapons include 2 CHI weapons and 2 secondary weapons</br>*Hit the lion’s mouth target and release the CHI orb!</br>*Hit the CHI tower and grab the CHI orb!</br>*Pull the rip cord and unleash the Speedor!</br>*Battle for the powerful CHI!</br>*Attach the power-upz for even more battling power!</br>*Compete with your friends in an action-packed game of skill!</br>*Collect the entire LEGO® Chima Speedorz series to create combo games!ima Speedorz series to create combo games! +
Theme
Legends of Chima +
Title
Ultimate Speedor Tournament +
Type
Set +
USPrice
$29.99 +
Advertisement