Brickipedia
Register
Don't have an account?
Sign In
Advertisement
in: Class 3 articles, Sets listed for ages 7-14, Legends of Chima,
and 2 more
English

The Crocodile Legend Beast looks like a regular Crocodile in LEGO form, but with extra spikes and metal armor to prepare it for the outlands. On top, is the Crocodile prince and warrior Cragger, with his trademark Vengious and new energy shield.

The Crocodile Legend Beast does not appear in the great story, but it plays a critical role at the end of Season 1. It is the only Legend Beast that evaded capture by the Dark Tribes, and apparently found Queen Crunket during its travels. It eventually headed for Chima (whether to escape the Dark Tribes or to return Crunket to her homeland is unclear), but became trapped by the vicious plants at the border of the Crocodile Swamp.

In Season 2, Cragger uses the Crocodile Legend Beast as his main made of transportation. Despite crocodiles usually being fast in water and slow on land - as well as the metal armor it wore to increase its defenses in the harsh Outlands, it managed to crawl faster than most of the other's vehicles, only being slower than Laval. Combined with his new Scale Ripper weapon, Cragger was an extremely powerful force, that held his own very well in the dangerous Outlands. It was shown to be acquainted with Lavertus, who affectionately calls him "Crocky", and fed him cupcakes. This is later revealed to be true because Lavertus is ShadoWind.

The Crocodile Legend appears again in Season 3 with the other legend beasts.

In The Call of Cavora it and the other legend beasts appear in the Phoenix Temple and breath fire to raise Eris, Cragger and Laval further up the temple.

In Trial by Fire it and the other legend beasts appear as part of Laval and Cragger's fire trial, where he shoots his fire breath at Cragger's shield.

In The Collector, Flinx and Laval deliver the Legend Beast to a dissapointed Crooler in the crocodile swamps so he can protect the crocodile tribe. An annoyed Crooler informs them that only she, Cragger, and Crug remain, as the rest of the tribe was already frozen by the hunters. When the Sabre Tooths attack, the legend beast scares them off with one roar. When the mammoths attack, Laval and Cragger fight Maula and Mottrot, but the combination of fire and ice causes mist to appear, so the legend beast blindly shoots fire into the mist. Mottrot escapes with what he thinks is "the phoenix child", but is actually Plovar. 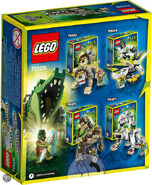