In the show's second season, this is Rogon's main mode of transportation. Although Laval opposed it coming since it's giant and not stealthy, Eris supported the idea of having one support vehicle, so Laval agreed as long as the supplies were essential. It was an absolute tank, invincible to the Outland's plants, and it saved Laval and Gorzan. Laval wondered who is driving the truck since Rogon isn't at the driver's seat. He turns on the lights to check and Laval angrily learns that his "most essential supplies" were several thousand of his favorite rocks, although Laval persuaded him to dump them out. It eventually got stuck when it couldn't go into a cave. In A Tangled Web, Cragger, Gorzan, Laval, Razar, and Bladvic disguise the truck to look like a fly so they can distract the spiders and allow the Gorilla Legend to escape. When Rogon (under the effect of the Rhinoceros Legend) becomes smart, he reveals that there was no auto pilot (a rock with a very pretty face painted on it driving the truck) but Rinona who stowed away. It was revealed that it was Rinona driving the truck into the Plants in the outlands and who rescued Gorzan and Laval. 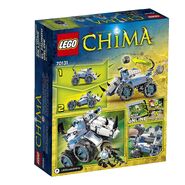 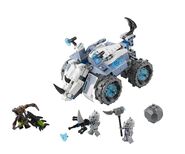 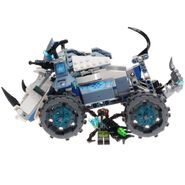 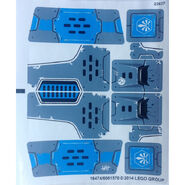 The Rhino tank in the show

$59.99</span></span>[File:Flag-NZ.png|x12px|link=]] $59.99 +
Released
2014 +
ShopDescription
Go in pursuit of the Rhino tribe’s stol … Go in pursuit of the Rhino tribe’s stolen CHI with Rogon’s Rock Flinger!</br></br>Rogon and Rinona are out on patrol searching for the 6-legged Sparacon who stole their CHI. Push the tail of the Rock Flinger down for pursuit mode and speed across the Chima landscape. When they spot Sparacon, activate the catapult and fling the rock into the spider’s path. Duel with Sparacon and his Spider Carapace blaster on the ground, using the 5-barreled Boulder Boomer and Hammer Horn and recover the Rhino tribe’s priceless CHI! Includes 3 minifigures with weapons: Rogon, Rinona and Sparacon.</br></br>*Includes 3 minifigures with weapons: Rogon, Rinona and Sparacon</br>*Features attack and pursuit modes, big all-terrain wheels, rhino horn detailing, omnidirectional translucent sonic blasters and translucent elements</br>*Weapons include a 5-barreled CHI Boulder Boomer, CHI Hammer Horn and Spider Carapace blaster</br>*Activate the catapult and rock for attack mode</br>*Hurl the enormous rock at Sparacon</br>*Push the tail of the vehicle down for high-speed pursuit mode</br>*Regain the Rhino tribe’s stolen CHI</br>*Measures over 5" (13cm) high, 7" (20cm) long and 4" (12cm) widem) high, 7" (20cm) long and 4" (12cm) wide +
Theme
Legends of Chima +
Title
Rogon's Rock Flinger +
Txt1
Rinona +
Txt2
Rogon +
Txt3
Sparacon +
Type
Set +
USPrice
$29.99 +
Advertisement