Brickipedia
Register
Don't have an account?
Sign In
Advertisement
in: Class 2 articles, Sets listed for ages 7–14, 70000 sets,
and 3 more
English

70166 Spyclops Infiltration is an Ultra Agents set released in March 2015.

Agent Trey Swift bears a shield similar to Agent Curtis Bolt's. Spyclops has two claws attached to his back, holds a spray bottle, and rides a small three-legged walker armed with a laser cannon and two stud shooters. He also has two Spyders that try to take a secret chip with AntiMatter's image on it.

After a portal turned an exterminator into Spyclops, he built a spider mech and went after a chip containing secret Ultra Agent files. The Ultra Agents were alerted about this, and sent out Ultra Agent Trey Swift to stop him. Unfortunately for Trey, he was outmatched, as he only had a stud shooter and a shield, and Spyclops had a spray bottle, two robot spiders, and a spider mech with two stud shooters and a powerful cannon. Trey fought with all he had, took down Spyclops, and brought the chip back to the Ultra Agents Mission HQ. 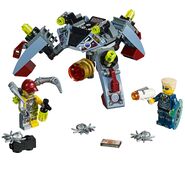 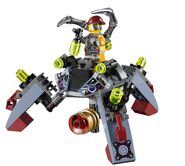