Invizable holds an ADU gun and rides a white and tan airspeeder towing a gold-loaded safe with a chain. The stealth bike's wheels are similar to those of the cool convertible from 70162 Infearno Interception. Also, it can convert to hover mode, just like the cool convertible. Two stud shooters can be clipped onto it. The agent looks similar to Agent Chase from Agents and Agents 2.0 or to the player agent from the app. 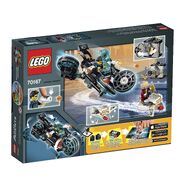