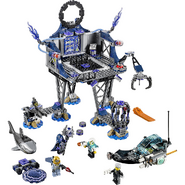 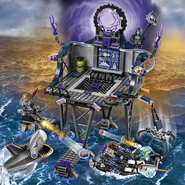 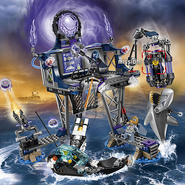 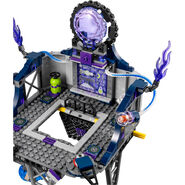 $69.99Additional prices: +
Released
August 2015 +
ShopDescription
Attack AntiMatter’s Portal Hideout to s … Attack AntiMatter’s Portal Hideout to save Solomon Blaze!</br></br>Emergency call for Ultra Agent Max Burns! Evil AntiMatter is holding your agent leader Solomon Blaze captive in the prison pod at his huge Portal Hideout, and is threatening to send him through the portal. Launch a rescue mission in the Agents’ speedboat, steering clear of the robot shark Sharkanator’s snapping jaws. Swerve away from the sea base’s claw arm and portal mine launcher, and retaliate by firing the speedboat stud shooters. Climb the base using the zipline and grappling hook, but beware of the trapdoor as you seek out the prison pod. Release Solomon and then join forces to defeat AntiMatter and shut down that portal once and for all! Then remove the integrated AppBrick Gadget from the Sea Base to play out other thrilling missions on your tablet! Includes 4 minifigures with assorted weapons and accessories: Ultra Agent Solomon Blaze, Ultra Agent Max Burns, AntiMatter and Sharx.</br>*Includes 4 minifigures with assorted weapons and accessories: Ultra Agent Solomon Blaze, Ultra Agent Max Burns, AntiMatter and Sharx</br>*AntiMatter’s Portal Hideout features a movable claw arm, portal mine launcher, trapdoor, opening prison pod and an opening portal/detachable AppBrick Gadget</br>*Agents’ speedboat includes a cockpit, stud shooter, zipline and a grappling hook</br>*Includes a shark with opening mouth</br>*AppBrick Gadget includes 4 AppBricks</br>*Weapons include Solomon Blaze’s gun, Max Burns’ stud shooter, *AntiMatter’ s portal staff and Sharx’s harpoon</br>*Accessories include Agent armor</br>*Evade the snapping jaws of the Sharkanator!</br>*Dodge the Portal Hideout’s huge claw arm</br>*Don’t fall through the trapdoor!</br>*Release Solomon Blaze from the prison pod and close the portal!</br>*Download the free LEGO® Ultra Agents 2 app for the ultimate digital experience where you become the agent and help to solve challenging missions</br>*Build your AppBrick Gadget included in this set and play out cool missions on your tablet</br>*AntiMatter’s Portal Hideout measures over 10” (26cm) high, 12” (31cm) wide and 10” (26cm) deep</br>*Agents’ speedboat measures over 3” (8cm) high, 7” (18cm) long and 3” (9cm) wide</br>*Shark measures over 4” (12cm) long</br>*AppBrick Gadget measures over 2” (7cm) high, 1” (5cm) wide and under 1” (1cm) deepigh, 1” (5cm) wide and under 1” (1cm) deep
Theme
Ultra Agents +
Title
AntiMatter's Portal Hideout +
Txt1
Agent Solomon Blaze +
Txt2
Agent Max Burns +
Txt3
AntiMatter +
Txt4
SharX +
Type
Set +
USPrice
$69.99 +